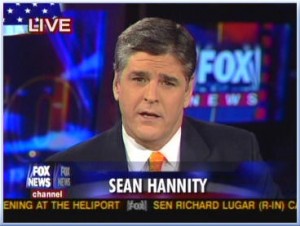 Fox News and radio host Sean “The Bigot” Hannity again puts President Obama on blast on his TV and radio show. He of course has a problem with the President’s comments on racism as a African American and Trayvon Martin case.

President Obama surprised everyone the other day when he walked into the White House press room and gave his views on growing up  as a black man and how ladies grabbed their purse when he walked into a elevator or other examples of racism he experienced. I was so happy the President came out and said what he said about the case in which George Zimmerman was found not guilty for shooting and killing a 17 year old unarmed Trayvon Martin.

But right wing bigots like Sean Hannity and others on Fox blasted the President on his views. Hannity treats the President worse on his radio show if you can believe that. The sad thing about Hannity is he REFUSES to change or listen when it comes to the President.

It is a fact that people like Hannity are DANGEROUS. Hannity actions helps to bring hate groups and extreme right wingers out who what to killthe President or hurt him. This is a fact readers. Sean Hannity and some of his Fox News friends are dangerous.

It is no surprise why the President has not and most likely will not be a guest anytime soon on Sean Hannity’s programs.

Weezy Bans All Alcohol From Tour Bus And Backstage

M-Bone From Cali Swag District Killed In Drive By Shooting